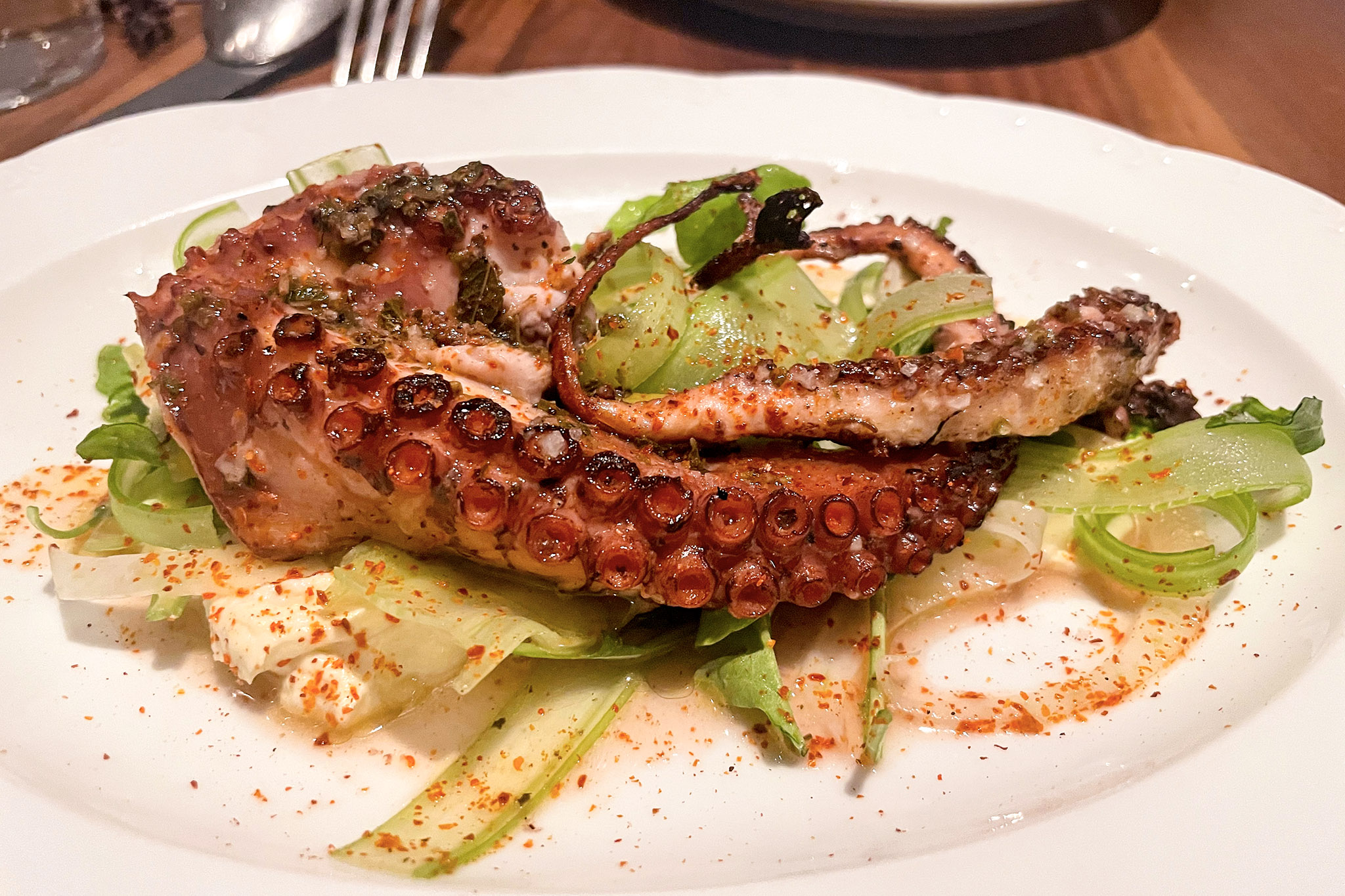 Callie really doesn’t want you to miss your sitting time. To start, the East Village restaurant charges a deposit of ten dollars per person when you make a reservation. And you’ll need a reservation, as the chic restaurant was in high demand even before it got a foodie nod from the Michelin Guide last year, its first in operation. Now this is arguably the hottest ticket downtown.

I made my deposit two weeks later. A few days before the date was due, reminders started popping up, via text and email. The day before, someone from the restaurant called me to remind me and to confirm that I still intended to show up. Of course I did. Are San Diegan diners so flaky? I wondered, then almost missed my reservation, arriving fifteen minutes late. Guess if more restaurants in San Diego start charging us to reserve a spot, we’ll only have ourselves to blame.

An architectural highlight of the spacious venue has to be the bar, which hides under intricately curved wooden arches, but the entire grand dining room exudes the kind of laid-back elegance that goes so well with contemporary California cuisine. Here, it’s more of a California version of pan-Mediterranean cooking emerging from an open kitchen, entirely in view of the dining area. Sitting nearby, I could watch the kitchen staff, including executive chef Travis Swikard, wearing turned-up baseball caps as they prepared a menu of fine dishes with high-end ingredients. 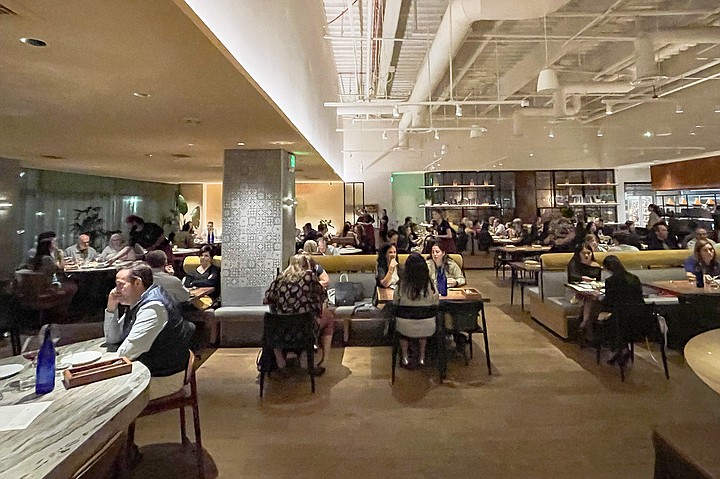 Perhaps what impressed me most about the operation of the kitchen was how relaxed all the cooks appeared, despite the high volume of orders being placed. Everyone who touched the food seemed calm and sure of themselves, an ambience that suited the room – once our seats were secured, diners had plenty of time to relax and linger over a drink. Like there’s no other place we’d rather be.

Ideally, each table orders and shares from the discrete sections of the menu: spreads and bread, raw and savory, salads and vegetables, pasta and land and sea. There’s even the option of tackling each section with a prix fixe dinner $70 per person, plus an additional $40 for wine pairings. 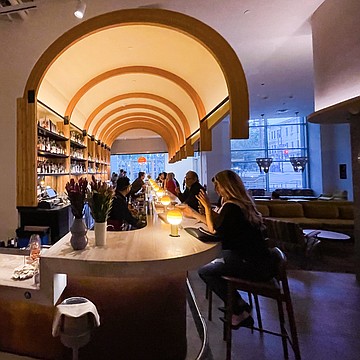 You could spend more in such a restaurant. Two diners could easily top $200 here without batting an eyelid. Keep in mind that ten dollars each of your reservation deposit is applied to your final bill, but so is an automatic 20% gratuity and a nominal 4% charge applied to employee benefits. So it’s worth considering that, including taxes, you should expect to spend around 33% more than any price you see on the menu.

On the bright side, these guys know you’re paying a premium for great food and service, and they aim to deliver on both counts. Our server was so friendly and knowledgeable about the food, I almost wanted him to sit down and chat a bit about each course. When he heard that we were disappointed with the first bites of seafood pasta, he insisted on replacing it with another pasta option. I told him that was nice but unnecessary. “In a place like this,” he explained, “we want you to leave here thinking everything was pretty much perfect.” A few minutes later, we taste a more impressive pasta: pappardelle with kurobata sausage stew ($28). 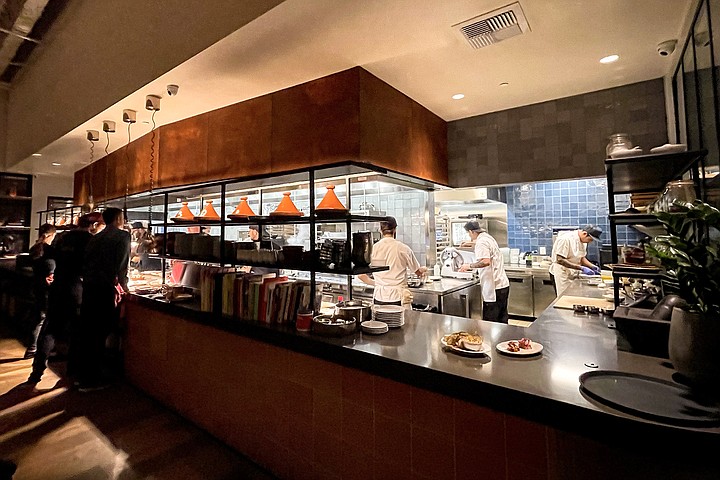 Chefs cook in an open kitchen

To be fair, it would have been hard for the pasta to compare favorably to our uni toast appetizers ($26). Not only are the two small pieces of toasted bread with tomato topped with uni (sea urchin), but they also feature shavings of Iberian ham.

These are two of the world’s tastiest ingredients in one bite; that should have been enough. However, that night, shaved black truffles could be added to any appetizer for an additional $20. Three ingredients of this caliber in one bite: I’m glad I tried it, but I’d probably have come away happy with just one bite of the plain uni toast and rated it as satisfying. 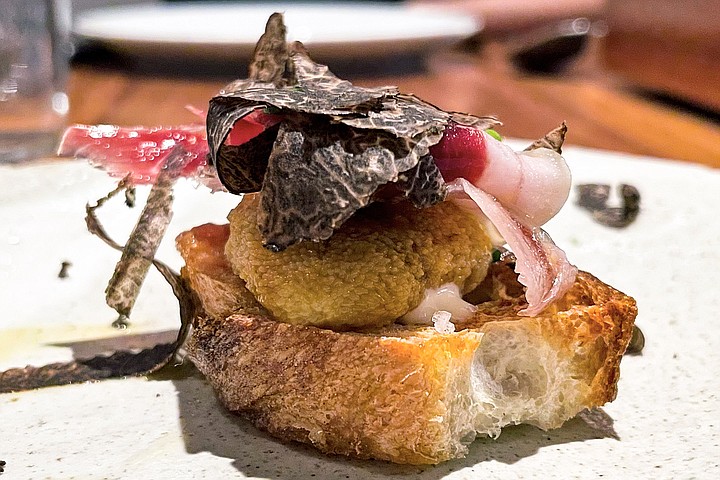 And yet, the cooking continued. From the land and sea menu, I ordered something I wasn’t sure about: octopus. Years ago I tried a Spanish-style grilled octopus on a trip to Barcelona, ​​and it became my go-to for all seafood. I had never tasted better since and I gave up after learning what intelligent sea creatures they were.

Callie’s version may be as close as it gets to regaining that memory. Poached and grilled, and served over shaved fennel, the sprawling dish may have left me feeling morally ambivalent, but my nostalgia couldn’t have been happier.

A special occasion type of restaurant for most of us, I’m not sure Callie really meets the supposed guidelines of a Michelin Gourmet Bib – two courses and a glass of wine for $40. But where that’s not a bargain, it manages to deliver a fine dining experience that’s well worth it.