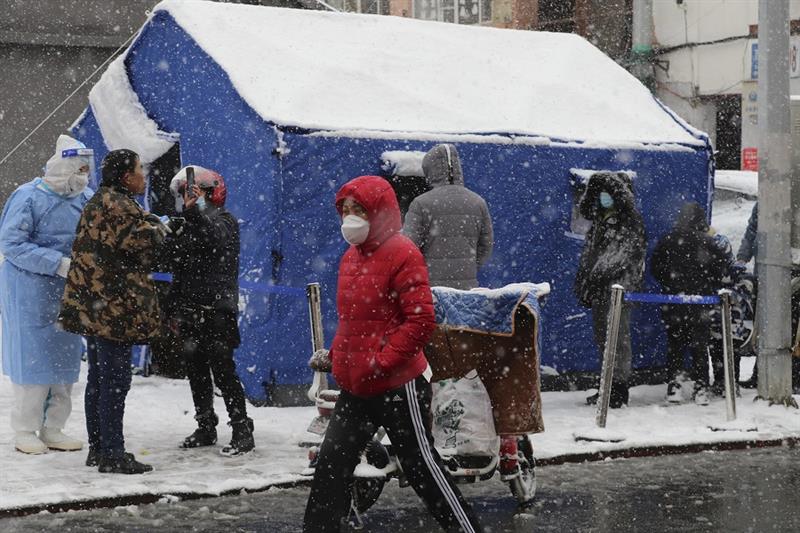 Millions under lockdown in China as virus surges

A resident lifts a child to take a COVID-19 test as it snows in Changchun city, northeast China’s Jilin province, Tuesday, March 15, 2022. AP

China reported 5,280 new cases of Covid-19 on Tuesday, more than double the number the day before, as the highly transmissible variant of Omicron spread in a country that has stuck firmly to a zero strategy. -Covid.

This approach, which relies on strict localized lockdowns and left China virtually cut off from the outside world for two years, seems stretched to the limit as Omicron weaves its way into communities.

At least 13 cities across the country were in full lockdown on Tuesday, and several others had partial lockdowns, with some 15,000 infections reported nationwide in March.

Health officials have urged people over 60 to get vaccinated – including the third booster – as soon as possible.

About 80% of people in this age group are double-vaccinated, according to official data – but Beijing is watching the situation in Hong Kong with anxiety, which now has the highest virus death rates in the world due to a low inoculation among its older residents.

Official Jiao Yahui told a press briefing on Tuesday that “the risk of serious illness is very high” for people in this age group.

The northeastern province of Jilin was the hardest hit by Omicron with more than 3,000 new cases on Tuesday, according to the National Health Commission.

Residents of several cities in the region, including the provincial capital Changchun – home to nine million people – are subject to stay-at-home orders.

Health officials said more than 8,200 Jilin residents have been hospitalized, with the vast majority showing mild or no symptoms.

Shenzhen – the southern tech hub of 17.5 million people – has been in lockdown for three days with many factories shuttered and supermarket shelves emptying, while China’s biggest city Shanghai is under a network restrictions.

City officials told a press conference on Tuesday that “there is no need to lock down Shanghai at this time”, opting instead for more “precise” measures.

Scenes of closed neighborhoods, panic buying and police cordons date back to the first phase of the pandemic, which first emerged in China in late 2019.

Although cases from the chaotic initial outbreak in early 2020 are widely believed to have been underreported, life since then has largely returned to normal in China under its strict zero-Covid approach.

But as lockdowns draw closer in Beijing, public places have tightened their scrutiny of ubiquitous health QR codes.

After a 21-day home quarantine with her mother and three-year-old child, project manager Mary Yue said she was forced to self-isolate after cases were linked to a playground that they had visited.

“I panicked when the health officials called… I was afraid they were taking us to a quarantine hotel,” the 34-year-old told AFP.

“But this time they’re letting people isolate at home. It’s a huge relief.”

Others have expressed exasperation as the pandemic continues in China, while much of the world tries to get back to normal.

“And now it’s starting again, when will it end?”

Experts predict a dent in economic growth as the virus spreads.

“Renewed restrictions, including the lockdown in Shenzhen, will weigh on consumption and lead to short-term supply disruptions,” Tommy Wu of Oxford Economics said in a briefing note.

He added that it will be “difficult” for China to meet its GDP growth target for the year of around 5.5%.

Dozens of domestic flights were canceled on Tuesday and aviation authorities said more than 100 international flights to Shanghai would be diverted to other Chinese cities between next week and May 1.

Fears of shutdowns prolonged a tech-fueled rout in Hong Kong, where shares plunged more than 6%.

As the financial hub grapples with its own deadly wave of Covid-19, a former senior government adviser condemned leader Carrie Lam on Tuesday and called on her to “resign in shame”.