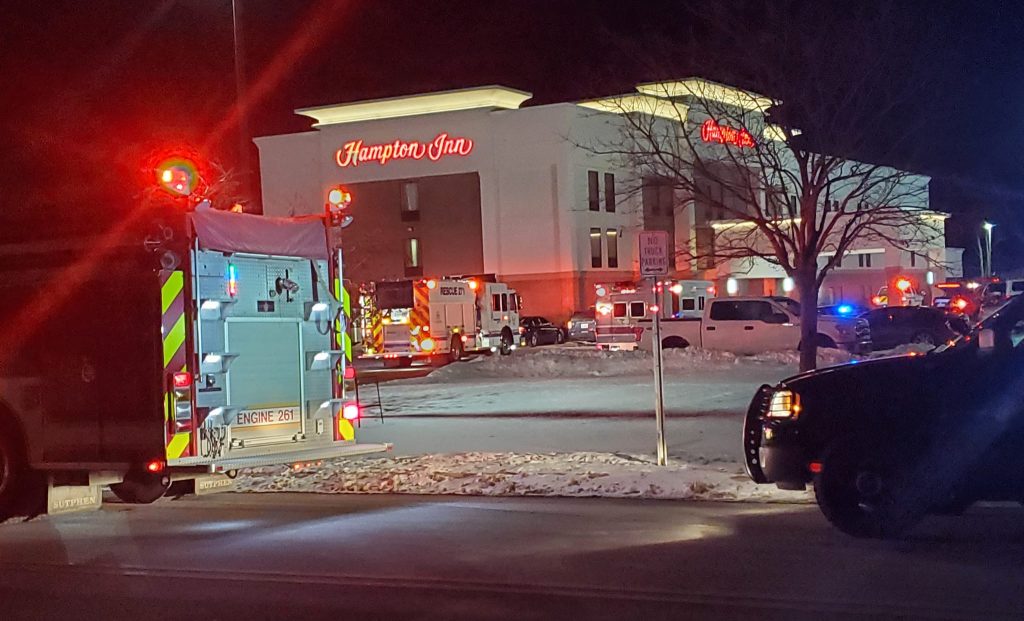 Officials blame a pool heater as responsible for the carbon monoxide (CO) leak that sent more than a dozen people to hospital on Saturday, although officials say the poisonous gas was not located in the swimming pool area of ​​the hotel.

Marysville Fire Chief Jay Riley said four of those hospitalized were from the pool, but the rest were guests located in other areas of the hotel.

Marysville Police Chief Tony Brooks said the investigation is ongoing, but officials believe the hotel’s pool heater malfunctioned, causing the CO to leak.
Riley said the pool heater is kept in an area “adjacent to the pool.”

“They had a CO detector in the pool area next door, but it didn’t activate, so we have the state fire marshal coming out this afternoon to investigate and determine why it didn’t didn’t go off,” Riley said.

He added that the levels in the pool area were “potentially fatal so it should have tripped for sure”.

Melanie Ziegler, vice president of community engagement for Memorial Health, said that following the incident, Memorial Hospital received seven patients transported by regional EMS and four others without an appointment, for a total of 11 patients. She said five of the patients were adults and six were children.

The Journal-Tribune has learned that at least some of the children were part of or linked to a Teays Valley youth wrestling team, staying in the area for a tournament.

Ziegler said seven patients – two in critical condition and five in serious condition – were transported to other hospitals either by ambulance or helicopter.

He said some patients may require treatment in a hyperbaric oxygen chamber.

According to Riley, local emergency crews transported at least one patient to Grady Memorial Hospital in Delaware.

Authorities report different figures for people transported to local hospitals, those treated at the scene and those who entered hospitals for treatment.

Officials said they would work together today to get specific numbers.

Riley said at 5:26 p.m. Saturday, the Union County Sheriff’s Office received a 911 call from the Hampton Inn Marysville, 16610 Square Drive, about an unresponsive 2-year-old child. As he drove to the scene, more 911 calls started coming in. Riley said first responders didn’t know what was going on when they first entered the hotel.

“We carry CO monitors in our first bag and as soon as we walked in they went off,” Riley said.

First responders found the child unconscious and began to help him.

“When we started dealing with this one, other people identified themselves as having symptoms or told us about someone who had become unresponsive,” Riley said.
He said a total of four victims were in the pool area.

First responders evacuated the victims from the pool area. Riley said that because the victims were suspected to be suffering from CO poisoning, “we had to do tests all over the building.”

He explained that as soon as the victims were evacuated from the area, the swimming pool was evacuated and the firefighters backed out of the building to put on breathing apparatus. At the same time, they began to ventilate the building.

“We don’t know what else is there, so we protect our people so they can perform rescues,” Riley said.

The fire chief said investigators found CO “on all three floors, which triggered the evacuation.”

Brooks noted the highest readings were in and around the pool, although he said other areas had “life-threatening levels”.

“We found unresponsive individuals on other floors,” Riley said. He noted that five hotel guests, not in the pool area, have been identified as “suffering from varying degrees of symptoms”. He said at least one wasn’t responding.

Riley said first responders actually went door to door at the hotel. He said if investigators did not get a response, they used a master key to enter the room.

“Everyone was understanding,” Riley said. “We had no pushback at all.

Obviously, people were quite surprised.

The fire chief said there was a smell of chlorine in the pool area, but “we did some tests and that wasn’t the cause.”

Additionally, Brooks said police and firefighters will work together this afternoon and throughout the week to investigate the incident.

“We have to determine: Was it the pool heater? How did he fail? How did this happen?” Brooks said. “We want to go over everything and see where we go from here.”
Riley said there will be a regional debrief on Friday.

“We want to talk about what went well and what didn’t and what we learned,” Riley said.

He said that in hindsight, there are always things the speakers would have liked to have done differently.

“Fortunately, from what I’ve heard, it’s small things,” Riley said. We don’t often have an event like this, but everyone was fantastic.

He added: “We’re just lucky the symptoms were recognized so early and people didn’t die because the levels were so high.”

Riley said the hotel was fully evacuated, but reopened on Sunday.