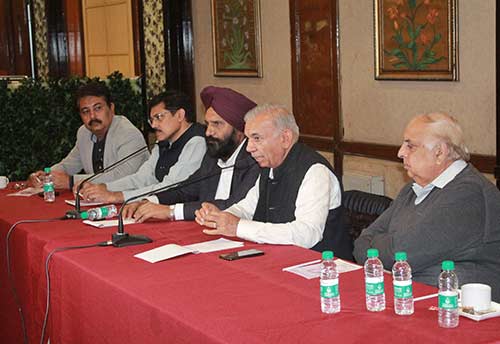 Punjab government should exempt MSMEs from 75% reservation of employment for homes: President of CICU

Punjab government should exempt MSMEs from 75% reservation of employment for homes: President of CICU

Ludhiana, Dec 9 (KNN) A press conference on the industrial problems of Punjab was held at the Reganta Klassic hotel in Ludhiana, attended by S. Upkar Singh Ahuja, president of the Chamber of Industrial and Commercial Enterprises (CICU) as well as other members seniors.

Singh highlighted the issue of rising steel prices and urged the government to order regulators to monitor the continuing rise in steel prices, the press release said.

Addressing the 75 percent job reservation quota for homeworkers in Punjab, he felt that it was not suitable for the industry and called for MSME exemption from it.

Further, highlighting the INR 474 improvement issues that have been imposed on the Phase 8 plots, Rajnish Ahuja said this needs to be addressed as a matter of priority as it creates many hurdles for all industries as they are unable to secure bank financing as well as Power Connection from PSPCL.

“Punjab Small Industries & Export Corporation Limited (PSIEC) imposes additional bank interest charges on the parcel holders, so the amount of the penalty has increased significantly, so this problem should be resolved as soon as possible,” Ahuja added.

He also pointed out that the government should set up a single settlement program (OTS) for all departments, namely PPCB, PSIEC, PSPCL, MCL, etc.