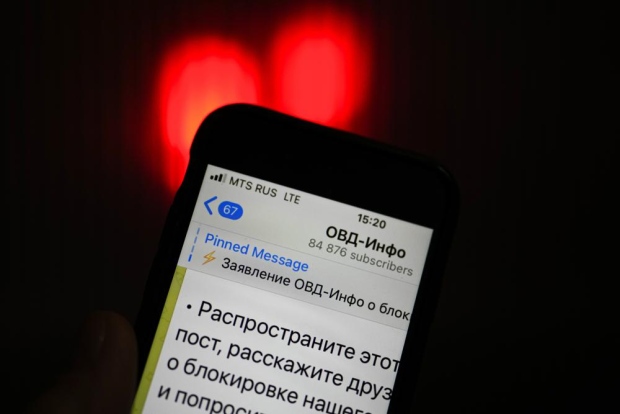 MOSCOW –
A Russian organization that tracks political arrests and provides legal aid to detainees said on Saturday that government regulators were blocking its website, the latest step in a months-long crackdown on independent media and human rights organizations.

OVD-Info reported that Russian Internet and communications watchdog Roskomnadzor has blocked the group’s website. The organization said in a tweet that it had not been officially informed of the decision and did not know the reason for the action beyond the fact that it was ordered by a court outside Moscow on Monday. .

The website was not accessible to Russian internet users on Saturday and was listed on the government registry of banned web pages. In light of the decision, OVD-Info urged its supporters to follow its pages on a number of social media platforms, such as Facebook, Twitter, Instagram, Russian social network VK and messaging app Telegram.

In comments to the Interfax news agency, Roskomnadzor said the website was blocked because, according to the court ruling, it was involved in “propaganda of terrorism and extremism” by containing material which ” justify the actions of extremist and terrorist groups ”.

The agency said social media platforms have been asked to remove the group’s accounts.

OVD-Info co-founder Grigory Okhotin dismissed the charges Saturday in an interview with The Associated Press.

Okhotin said the decision to block the website was a surprise, even though the group knew the prosecutor’s office in Lukhovitsy, a town 120 kilometers (75 miles) southeast of Moscow, had opened an investigation.

“Our lawyer went there, but they refused to provide any documents or explain anything about the merits of the case, even though they themselves summoned him,” Okhotin said. “Of course, we didn’t realize it was going to go so quickly to the courts – which we weren’t asked, by the way – and to the website being blocked on charges of justifying terrorism and the extremism.

OVD-Info has gained notoriety for its monitoring and meticulous counting of arrests during street protests in Russia. Activists first began the practice during mass protests sparked by a 2011 Russian parliamentary election marred by numerous reports of voter fraud, and then formed a group that has continued the work over the years.

The data has been indispensable to news organizations over the years, as Russian authorities have largely remained silent or downplayed the scale of mass arrests during protests and protests.

OVD-Info also functions as a legal aid group, sending lawyers to help protesters detained in police stations and in courts. In September, an international human rights organization based in Sweden awarded OVD-Info with the Civil Rights Defender of the Year award.

That same month, Russian authorities designated the group as a “foreign agent” – a label that comes with excessive government scrutiny and strong pejorative overtones that may discredit the recipients. The founders of OVD-Info are committed to continuing the work of the organization despite the designation.

Russian authorities have stepped up pressure on rights groups, media and individual journalists in recent months, appointing dozens of foreign agents. Some have been declared “undesirable” – a label that bans organizations in Russia – or accused of links to “undesirable” groups.

The Russian Justice Ministry on Friday added two more advocacy groups to the register of foreign agents: Coming Out and Revers, which advocate for LGBT rights and provide assistance to the struggling Russian LGBT community.

Russian law requires a non-governmental organization, media, informal movement or individual to be listed as a foreign agent for receiving foreign funding – even a small donation from a foreign national counts – and for engaging in a loosely defined political activity.

OVD-Info, along with other rights groups, launched a campaign in September to abolish the “foreign agents” law. By the end of December, more than 240 organizations and more than 260,000 people had signed a petition calling the law “discriminatory and illegal”.

OVD-Info submitted the signatures to the lower house of the Russian parliament, the State Duma.

Okhotin called the obstruction of the website “another round of pressure on us and on civil society.” He said he believed OVD-Info was being targeted because of its importance and its campaign against the “foreign agent” legislation.

“We are very tall, we are very visible, we are supported by a lot of people in Russia,” Okhotin said, adding that more than 100,000 Russians support OVD-Info with donations.

He said the group would continue to inform Russians about the political crackdown despite the website being unavailable to viewers.

“We will certainly find some form or another to keep the public informed,” he told the AP.

Daniel Kozin contributed to this report.

Disclaimer!Verve Times is an automatic aggregator of all media in the world.In each content,the hyperlink to the main source is specified.All trademarks are the property of their rightful owners,all documents are the property of their authors.If you are the content owner and do not want us to publish your materials,please contact us by email-[email protected].Content will be removed within 24 hours.

Visit Clarksville is working on translating the website into Spanish