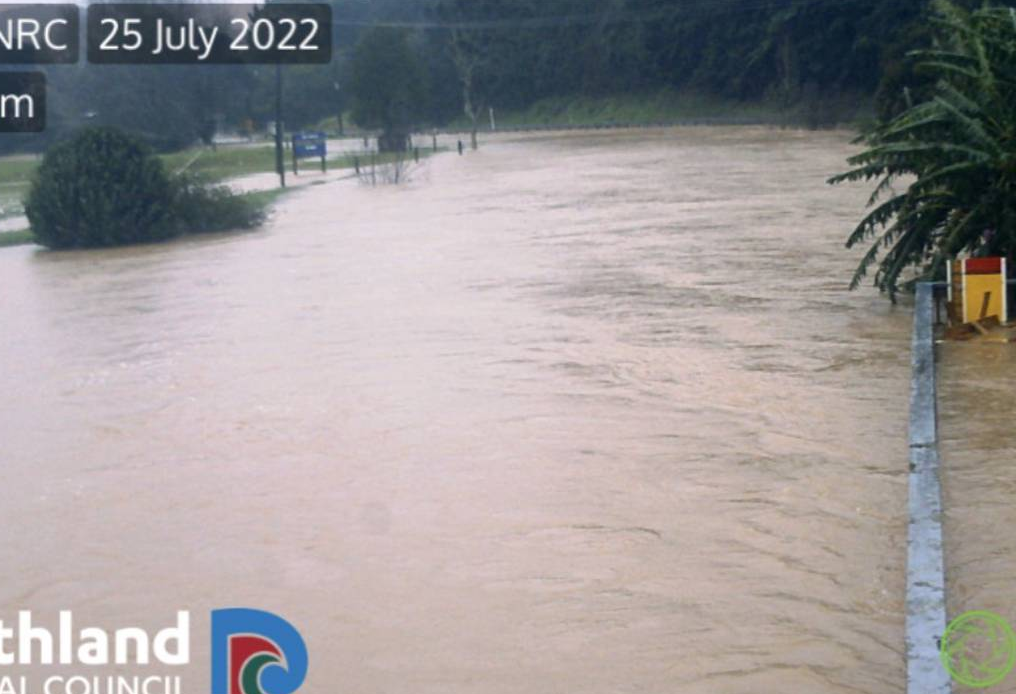 Wild weather hits the top of the North Island

The Kaeo River in the Far North, which is prone to flooding, spilled onto State Highway 10 after heavy rains. A river webcam shows that the water level is at almost 3.5 meters.

Schools are closed, thousands of people are without power and roads have been hit by floods and slides across Northland.

However, the worst rainfall is yet to come. MetService has predicted maximum rainfall intensities of 15-20mm per hour this afternoon and evening in Northland.

In Auckland, the wild weather led to a series of road accidents during the morning commute, including a car driving down the southern highway. Speed ​​limits have been reduced on the Harbor Bridge as a precaution.

Winds of up to 120 km/h lifted Waitematā harbour. Photographs showed a sinking yacht at Sulfur Beach in Northcote.

The new ‘rainmaker’ weather event arrived overnight, bringing warnings of heavy rain and high winds for many parts of the North Island.

Heavy rain is falling in Auckland, Northland and other parts of the North Island this morning as the tropical low pressure system sets in.

There are over 20 weather watches and warnings in place across the country and the worst weather is expected to hit the North Island from 10am to 2am tomorrow.

Here is an image showing the rain accumulations over Northland and Auckland over the past 24 hours. About 100mm in eastern parts of Northland. Less recorded around Auckland so far but more to come throughout the day. https://t.co/Yjbq0jgaoz for your predictions pic.twitter.com/qynTCghmxA

Parts of the Waikato are also affected by high winds with an overturned truck and reports of power lines in Matamata.

The wild weather will move south as the day progresses, with heavy rain warnings and watches in place for Northland, Auckland, Coromandel, Bay of Plenty, Mt Taranaki, Tasman and Marlborough.

MetService said streams and rivers can rise quickly, surface flooding is possible and driving can be dangerous, especially for high-sided vehicles.

There were also warnings of high winds over the Hauraki Gulf this evening. Winds could reach 130 km/h.

Just after 6am, Auckland Transport issued an alert that all Gulf Harbor ferry services will be switched to bus and shuttle services today due to weather conditions.

The low and its associated fronts are expected to continue south through Thursday.